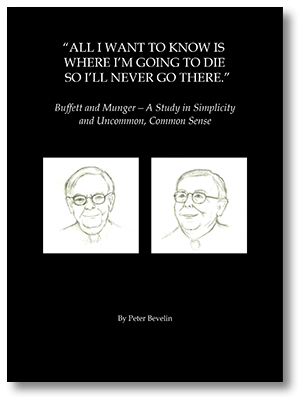 Buffett & Munger – A Study in Simplicity and Uncommon, Common Sense

This book is about the fictitious Seeker, who has known a lot of misery, and his visit to the “Library of Wisdom” where he meets another fictitious character – the Librarian- along with Warren Buffett and Charles Munger. The Seeker learns how to make better decisions to help his children avoid doing the dumb things he has done. For instance, he learns from Buffett and Munger the best way to prevent trouble is to avoid it altogether by learning what works and what does not. They do so in the spirit of the anonymous man who said: “All I want to know is where I’m going to die so I’ll never go there.”

Additionally, the book provides examples of pure folly and some lessons on how to make fewer dumb mistakes than other people. And then how to fix mistakes faster, should you make them. The major lesson is “ignorance removal” and the notion that decision-making is not about making brilliant decision, but avoiding terrible ones.

This is not a book for those who like complexities or advanced math – rather it’s for those who love efficiency, simplicity and common sense or judgment – hallmarks of Buffett and Munger. Like Einstein, both have a remarkable ability to eliminate folly and superficiality and get directly to the heart of things.

As with Poor Charlie’s Almanack, Seeking Wisdom, A Few Lessons and The Most Important Thing, net proceeds from sales of All I Want To Know Is Where I'm Going To Die So I'll Never Go There will be donated to charitable, non-profit organizations.